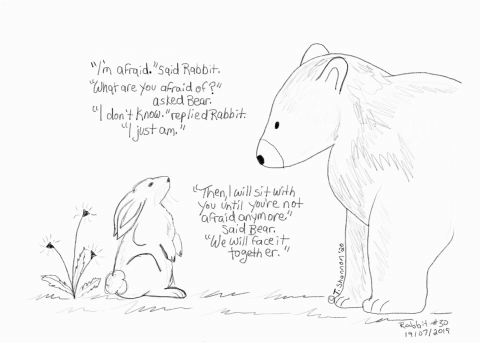 Simple Drawings of a Rabbit and a Bear Go Viral During Pandemic, Offering Comfort Worldwide
TORONTO - eTravelWire -- Canadian independent publisher Wintertickle Press released a graphic novel from author and illustrator Tara Shannon titled Rabbit & Bear Make a Wish. This hardcover gem filled with inspirational insights was an outgrowth of a simple illustration Tara posted on social media of two characters, Rabbit and Bear, comforting each other last March when the lockdowns began. The dialogue:

"What are you afraid of?" asked Bear.

"Then I will sit with you until you're not afraid anymore," said Bear.

"We will face it together."

The message went viral, resonating with the current world situation and emotions people were experiencing during the beginning of the pandemic. But this wasn't the birth of the characters, this was their growth spurt. Tara states, "I created Rabbit in 2019 to bring hope and comfort to myself while I processed my own grief, loss, anxiety and despair. From 2009 to 2013, I experienced a miscarriage, the end of my marriage, the loss of both my parents, and my own cancer diagnosis. To top it all off, while on a medical leave from work, my job was terminated. I knew that sooner or later I would have to work through all of my feelings. Rabbit helped me do that."

More on eTravel Wire
Later, Tara added the character Bear, which she describes as a combination of her parents, grandparents, and a wiser version of herself. Her style is simple yet profound. Some have likened her messages and insights to A A Milne or Charlie MacKesy. Although threads of inspiration and mental health run through the works of all these authors, Tara's style and message is uniquely her own.

Tara's work has caught the eye of more than just the general public. She has received responses from parents with ill children, widows and widowers, people suffering from mental or physical illnesses or have lost ones they love, people who have long struggled with grief, and people who are experiencing the pain of anxiety and depression and loss during this pandemic. Professionals and organizations such as the American Childhood Cancer Organization, teachers, librarians and many more from across the globe are often sending messages to utilize Tara's work in a professional manner.

One of Tara's images was shared with a family whose child has a serious illness. The illustration brought hope to the family. This inspired Tara to start a GoFundMe to raise money to purchase 25 hardcover books for the McMaster Children's Hospital. She met her target goal within a day.

More on eTravel Wire
Psychologist Anna Polotskaia says, "Rabbit & Bear Make a Wish speaks to people on a very deep and emotional level. Beautiful examples of vulnerability, inner strength, and the power of emotional connections in Tara's work win your heart and foster compassion for self and others."

Tara continues to create new drawings and shares them on a regular basis on her social media @tarashannonwrites.